It is inevitable that in every actor who writes a blog, they write an entry about giving up. Because how could they not? The possibility that this career will never work out is all too real, especially as the actor grows older and sees their non-actor friends having stable jobs, stable relationships, and a stable life that they once mocked them for as being boring and straight-edged. “Perhaps I made the wrong choice in being an actor?” we ask ourselves. I know all of what I’m saying is dedicated for actors, but I also know that it can be extremely applicable to everyone pursuing their dreams and the struggles that comes with it. 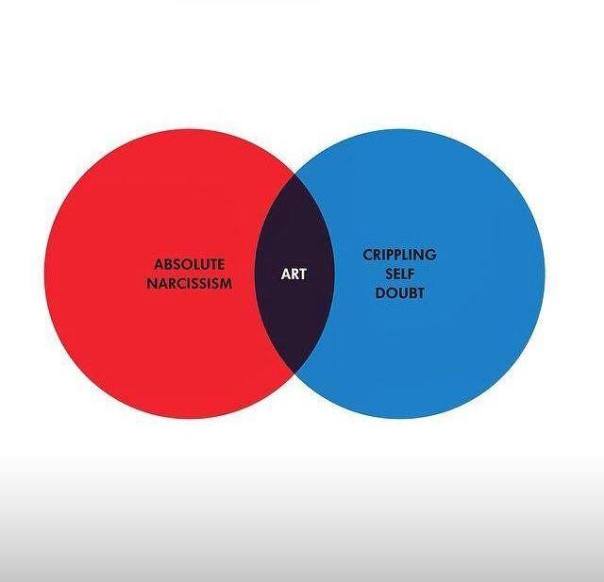 Over the past 2 months, I’ve had more pep talks to convince my actor friends not to give up their career than I would like to admit. The number got to the point that a small part of me started wondering if I was being so passionate with them not giving up because I am trying to hide the holes in my own confidence that this MAY not work out for myself. Yet every individual actor has problems, no matter where they are in their career. These are some (of many) concerns that we as actors think about:

And the list goes on. Boy, does it ever go on. And it never, ever stops.

At times like these, social media can be the worst because we as actors are extremely narcissistic people and when we have an awesome win to announce, we let the whole world know of our victory. Mind you, there is absolutely nothing wrong with this as it is in many times essential to market oneself that they are working and making things happen for their career. Yet to their colleagues and friends who are in a massive slump, whether they truly are (AKA broke as hell) or conjured up in their head (“my very green grass is not as sparkly diamond green like this less-than-talented actor guy I know over here”), it’s the worst news to possibly hear. We want to support our peers but at the same time, we wonder why we can’t be where they are. We get annoyed when they post their #setlife selfies on Instagram, when they announce every single audition they get, when they subconsciously humble brag that they worked on 4 nationals in 2 months, and so on.

That’s just one of the factors that make us question ourselves.

As for the other factors that can wear an actor down to just quit the business? Whether it be time, money, family pressure, or sheer psychological stress, these are real serious issues that every actor will face at least once in their life. And while there are numerous ways to stay positive in this insanely unpredictable career, most of them veer to the feel-good, preachy realm that I honestly don’t give a shit about. So here’s my list of how to stay alive and keep your morale afloat:

1. YOU NEED GOOD PEOPLE IN YOUR LIFE

Who will be the people that will be there when we experience these hardships? What will this life of ours all mean? “Happiness” achieved because you booked some movie or TV show and you got to be on a red carpet? “Fulfillment” because you got a big fancy house, festered by people who only give a quasi-shit about you? While the pursuit of happiness will forever be elusive, I truly believe we can have an idea how to achieve it when we maintain the relationships to the people we love, to spend time with them and be there for them for their significant moments and for their most difficult times. Once we know we have such people we can rely on, to tell us the honest truth about ourselves, to keep us grounded and inspired, only then can we ever think that we can sustain this acting career for decades to come.

2. “PRODUCTION IS THE BASIS OF MORALITY”

I see too many actors bemoan that they aren’t going anywhere in their career when in reality, they are just waiting for their agent/manager to get them that one audition…that one audition that will change their life forever. But in this day and age, careers aren’t made by waiting but by the individual hustling to market & better themselves.

Put more challenging scenes up in your acting class. Write that short film idea that you said you always wanted to do for a year. Get together an accountability group of actors so that every one of you can keep each other in check and push each other. Reach out to that director you once worked with 2 years ago and see how they’re doing. Go to that film festival you’ve been meaning to go to and network with the writers, directors, producers that are milling around the lobby afterwards. Drop by at your agent’s office and wish them a happy birthday (for starters, you should always find out when your agents’ birthdays are. It’ll do you wonders.) Send those postcards/tweets out to the casting directors you have auditioned/booked for and remind them that you’re still an actor and still present. Have that lunch with that writer acquaintance you always admired their work for and get to know them better. And so much more.

There are SO many things an actor can be doing every single day and thus you have no excuse to sit around, waiting for something to happen.

3. HAVE FUN IN EVERYTHING YOU DO

It’s far too easy to take your career so seriously, that you forget what you even came to be an actor for. We became actors not solely for the reason to pay our rent or to become famous or to get hot girls, we became actors because we wanted to express. That with every audition we get, we have the opportunity to be a kid again and play in the sandbox where our imagination has no boundaries.

Every audition, no matter how big or small, allows us to do what we love to do and meeting new people who have similar dreams and aspirations like ours. There is joy in every single opportunity and it is essential that we can get to a point in ourselves that we genuinely evoke that joy whether we go in for a USC student film, a Taco Bell commercial, a Criminal Minds producer’s session, or the 4th callback for the main lead in a Christopher Nolan film.

4. CELEBRATE YOUR VICTORIES, BIG OR SMALL

We often count all the things we have not accomplished, rather than what we have. Comparison is the greatest enemy to our confidence and our wandering eyes will look towards our peers and think that they are doing so much more, so much better, and so much faster. But our journey is alone for ours to make, without any comparison. That when we audition or book for any project, we celebrate it for what it is. Go eat that beautiful Cinnabon. Have that glass of delicious Pinot Noir. Go frollick yourself silly and roll down the grassy green hill in your favorite park. This career is hard enough as it is so it is essential we take the time to reward ourselves for the trek we are taking.

And while we’re on the trek, to notice our fellow travelers and admire them as well 😀

5. REMEMBER THAT LIFE ITSELF IS ALWAYS THE BIGGER PICTURE

As silly as this sounds, your acting career does not compose the entirety of your life. Whatever life is, it’s far bigger, mysterious, exciting, terrifying, and exhilarating than whatever small dot an acting career represents. So enjoy all the little moments you can possibly get in your life, the memories (good or bad), and live in the moment to the fullest degree.

This may even mean that you’ll have to take a step back from acting, especially if you now have a family to raise or if acting is truly driving you insane and making you depressed. You must take care of yourself first and foremost because your acting career, no matter how successful it is, means absolutely nothing if you can’t even live with yourself.

Because how can we possibly be the best actor we can be when we don’t even truly experience life? How can we even reflect that? So live, baby, live.

With all that being said, I’m going to go enjoy a laidback birthday party playing board games, eating food, and having good times with my group of friends who I’ve known for several years. I can’t ask for anything more 😀